News value? Not much 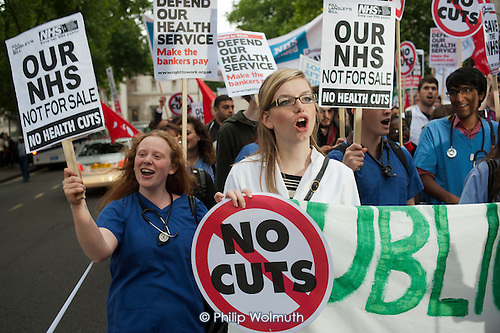 Just three days after the very thoroughly photographed gathering of a couple of hundred pro-cuts provocateurs outside Parliament (see below), a march of several thousand from University College Hospital to Whitehall was largely ignored by the mainstream media. The relative news values of the two events suggest that marches and petitions, on their own, are unlikely to shift the political agenda. For that to happen, an organisation with significant public recognition would need to formulate and propound a clear alternative to the current neo-liberal orthodoxy. Now that would be news.
Posted by PHILIP WOLMUTH at 6:02 pm No comments: 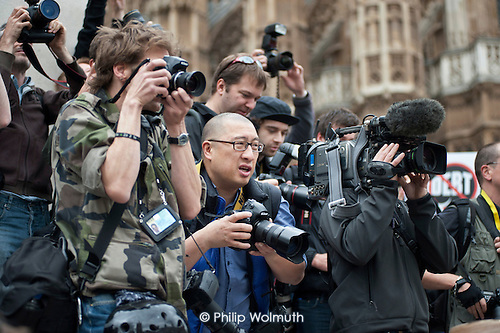 There were a large number of photographers at a very small gathering of anti-debt, anti-tax protesters opposite Parliament last Saturday morning. Possibly as many as covered the much larger demonstration, against cuts to benefits and services for the disabled, earlier in the week. Amongst the rather smartly dressed agitators were a few rightist celebrities not normally seen out on the street – UKIP leader Nigel Farage, Conservative blogger Guido Fawkes (Paul Staines), Bill Cash MP – but hardly enough to justify such media interest.

Of course, the rarity of such an event makes it instantly more appealing as a news story, and photos duly appeared in various publications the next day. That novelty value illustrates an essential truth about news: that it has to be - new. It does not report what is, but what has changed, or is different. That is why a train crash makes the national headlines, but the average nine deaths a day on the roads only make the locals. And why so many of the ongoing issues that confront people every day go largely unreported.
Posted by PHILIP WOLMUTH at 3:41 pm No comments: 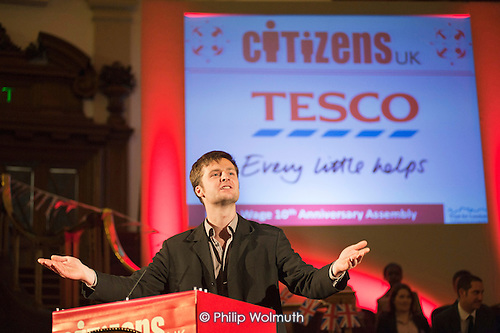 At an assembly marking the 10th anniversary of the Living Wage Campaign last week, Citizens UK launched a campaign to persuade supermarket chain Tesco to pay its workers a Living Wage. The company’s “every little helps” slogan, designed to promote its low prices, applies equally well to the wages of its employees, as was made clear in personal testimony on the impact of the Living Wage on their own lives by individual members.

The community organisation also announced the updated Living Wage rate for London (£8.30 an hour), and for the rest of the UK (£7.20). The National Minimum Wage is £5.93. More pictures here.
Posted by PHILIP WOLMUTH at 4:53 pm No comments: People had differing ideas as to what to wear for last Friday’s big wedding. Union Jacks were everywhere, and republicans will have been disappointed at the paucity of dissenting voices, although there were a few on show. It’s hard to tell how much of the hype was generated by self-serving media hysteria. But the fact that 2 billion people worldwide were watching, if true, is astonishing. And mildly depressing. More pictures here. Posted by PHILIP WOLMUTH at 3:17 pm No comments: