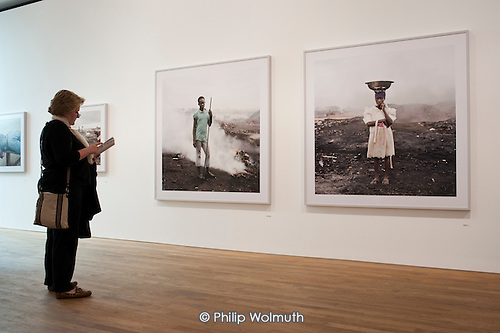 The Photographers' Gallery, which re-opened in May following an 18 month refit, is currently showing work by the four finalists in the gallery's annual Deutsche Borse Photography prize. Last year's exhibition (held at the University of Westminster during the gallery closure) came in for some strong criticism for its narrow, overly-conceptual focus. This year is no different.

The text panels which introduce each photographer set the tone. The “interventions” of John Stezaker, who hasn't actually taken any photographs (just cut up other people's), “present us with a dislocated view of the world”. Pieter Hugo “presents us with a world that is characterised by complex relationships and interdependencies, somewhere between modernity, tradition and myth”. And Rinko Kawauchi has the ability to “turn the mundane into the extraordinary and poetic...”, a cliché that has prefaced countless other exhibits with nothing to say.

Perhaps the grandest claim is for the work of Christopher Williams, whose series “addresses the impact of the Cold War on our society”. The picture chosen for the catalogue (and the only one I can remember of, I think, three exhibited) is a large colour print (the favoured form for this sort of thing) of red and green darkroom trays. Perhaps the blurb is right when it goes on to state that “Williams' projects defy easy reading as they involve multiple sub-texts and themes, layers of connotations and background stories”.

Although I am a documentary photographer with a desire to use images to communicate, I am not averse to the poetic, subtle, ambiguous, or elegaic. However, even if it is any or all of these things, an exhibition also needs to have a coherent purpose. Only Pieter Hugo's (visually very strong) photographs (above), of Ghanaian slum dwellers recycling electronic waste, come close. But because they aspire to the status of 'art' rather than photojournalism, they are not presented in a context sufficient to fully explain what is going on, and why, or how such an unsatisfactory situation might be remedied.

It's the only game in town, though. Galleries are flourishing, even as newspapers fold. Auction house prices rocket as reproduction fees plummet. Everyone is a photographer now. Except Martin Parr - the one-time photographer and Deutsche Borse Prize jury member is now listed on the gallery wall as an 'artist'. Wise move.
Posted by PHILIP WOLMUTH at 4:48 pm No comments:

Email ThisBlogThis!Share to TwitterShare to FacebookShare to Pinterest
Labels: photography 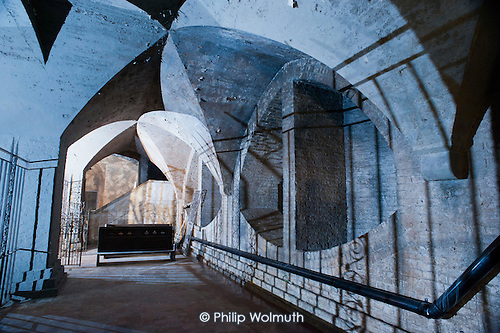 Even when not shooting for editorial, I regard myself as a photojournalist, reporting the world as I find it and, unless it's unavoidable, I prefer not to use artificial lighting. But there are times when the available light just isn't of the right quality, quantity or direction to make a picture that will tell the story.

The crypt of St.Mary Magdalene Church in North Paddington, which I was asked to photograph recently, is a dank, dark place with a trickle of daylight filtering through narrow windows high up one of its dripping walls – and a surprising secret. To one side of the roughly rendered brick arches that support the nave and aisles above is an extraordinarily ornate chapel. Its crumbling plasterwork is painted sky blue; the intricate altarpiece is covered in gold (paint, not the real thing, I assume). It has been disused for years, but the contrast with the gloom that surrounds it is still startling. All this can only be seen with the help of three plug-in builders' lamps, the crypt's only regular light source.

The photos above and below were taken using two off-camera flashguns and one of the builders' lamps. The lighting has undoubtedly changed the look and feel of the crypt and its decaying chapel, but it has brought out striking architectural features that would otherwise have been lost in the murk. Did I go too far in letting my lights colour the arches blue (above)? I don't think so. In my book, it's an acceptable manipulation of reality, given the purpose at hand - the pictures will accompany an application by the Paddington Development Trust to the Heritage Lottery Fund, for money to renovate the building and create a community arts centre. 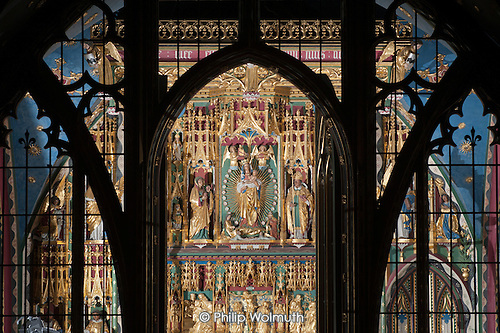 Posted by PHILIP WOLMUTH at 3:53 pm No comments: