To Hell in a Dust Cart 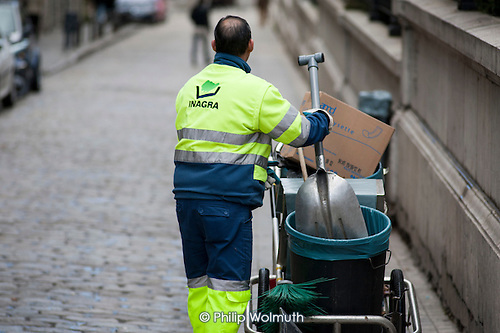 The financial crisis in Spain has been top of the agenda for European finance ministers for some time. But it was not EU-imposed austerity measures that provoked the recent 13 day strike by street cleaners and refuse collectors in Granada.

The dispute, over cuts to wages and reduced terms and conditions, was not the result of spending cuts by the city authorities, but of an opportunistic attempt by private contractor Inagra to boost profits. The company is a subsidiary of Cespa, the ninth largest waste company in Europe, itself a division of Spanish construction group Ferrovial, owner of BAA (which runs Heathrow) and Amey (the main contractor building Crossrail).

The stoppage appears to be part of a wave of strikes across Spain. According to a report by the Public Services International Research Unit (PSIRU), the big European waste disposal companies are attempting to restore falling profits by cutting costs in their contracts with municipalities, as the industrial and commercial waste markets have shrunk in the recession.

The episode in Granada ended in defeat for the workers a few days before I arrived there last week (thus, regrettably, missing scenes apparently reminiscent of our very own Winter of Discontent). With unemployment in Andalucia the highest of any region in Spain and even, according to one report, anywhere in the EU, they were in an unenviable position. Now they are back on the streets (above) with a 2.5% pay cut, eight days less annual leave, and an increase in the working week from 35 to 37.5 hours.  As in the UK, it is a balanced economy: the poor get poorer so the rich can get richer. More pictures here. 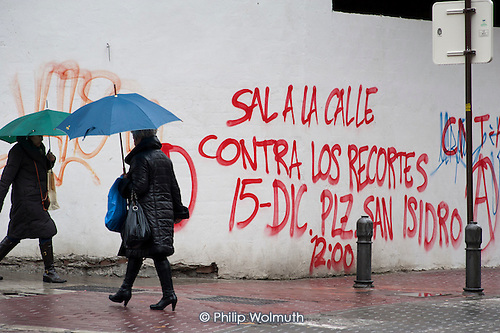 "Take to the Streets Against the Cuts"
Posted by PHILIP WOLMUTH at 11:16 pm No comments:

Not Really a Camera Review 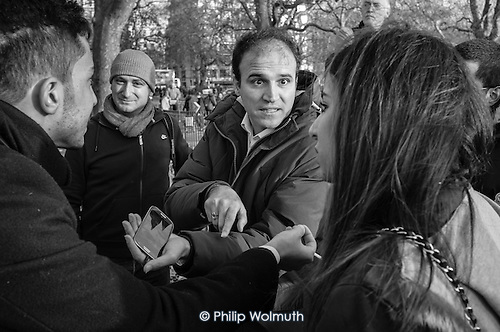 I have returned to a project I began thirty five years ago and rediscovered the joys of working in black and white with a small camera. Only this time, instead of film and a Leica, I'm using a digital Fuji X100.

The photo above was taken with the Fuji a few weeks ago; the one below is a scan from a B&W negative shot in 1993.

I took my first pictures at Speakers' Corner in 1977, and have continued to photograph there sporadically ever since.  However, when I switched to digital in 2003 and film processing fell out of my daily workflow, the occasional visit to Hyde Park with heavy and obtrusive DSLRs produced immaculate but unappealing colour images that I filed away and forgot about.

My recent purchase of the X100 coincided with my involvement with a new Speakers' Corner oral history and archiving project, Sounds from the Park, but it wasn't until I revisited the place with it that I realised I had in my hand an almost perfect digital replacement for my old M6.

The camera was clearly designed to appeal to photographers nostalgic for the retro look of knurled dials, exposure rings and chrome finish. But it's the small size, virtually silent operation, and high quality files that make it such a pleasure to use.

For any non-photographer reading this, that's pretty much all you need to know about the camera itself. For me, its most significant feature is that it doesn't look like the weapon of a paparazzo. Like a Leica, nobody – apart from the occasional camera buff – pays it any attention.

For those after a bit more detail, I can add that even its limitations are a plus. It has a fixed lens (equivalent to a 35mm on a full frame camera), so no time is wasted selecting a focal length: the only option is to find a 35mm shot that works. And because it's not the fastest camera to focus or write to card, it encourages care in choosing the decisive moment.

For most of the work I do, the specifications of the equipment I use are irrelevant – I just need to make sure the particular bits and pieces I bring along are capable of producing the required image quality. What is different about fly-on-the-wall documentary projects like Speakers' Corner is that the intrusiveness, or otherwise, of the camera is also a factor, and can make a big difference to the process of making pictures. The DSLRs I have been using for the last ten years are great machines, and produce fantastic pictures, but they are big, heavy and noisy. It's hard to pass unnoticed with one hanging from your neck. Not so the X100. Its innovative design has enabled me to continue my old project in the same spirit in which it was originally conceived, without having to take the radical step of re-activating my long-neglected darkroom.

Speakers' Corner has changed over the years. It has got smaller; there is a narrower range of speakers. The demographics have shifted: there is still a predominance of preachers, although now at least as many are Muslim as Christian. But it still has the buzz generated by the energy and eccentricity of face-to-face argument. There is nowhere else you can get that with such intensity. I love it.

And in case you're wondering, the Fuji is great in low light, has a brilliant hybrid optical/electronic viewfinder, and produces very nice colour too. 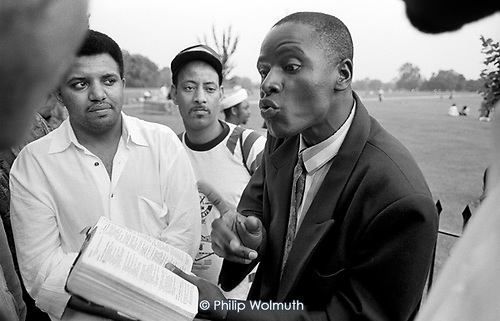