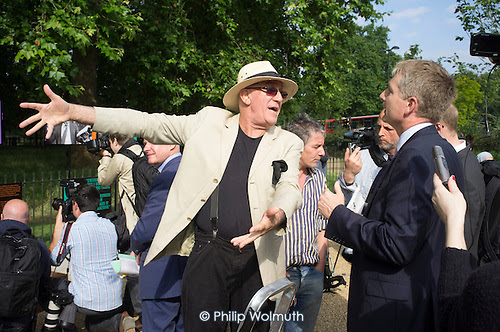 Face-to-face argument, rarely possible between governors and governed, is what the place is about, and this one took place in front of the TV cameras. Tony Allen and Heiko Khoo, who have been speaking in the park since 1978 and 1986 respectively, heckled Javid mercilessly through out his brief speech, and then confronted Royal Parks senior management (above). The Hyde Park speakers are a hard bunch to organise, but there is resentment at the noise from the rock gigs held throughout the summer on the nearby field, the cycle lane that runs through the concrete area on which speakers and crowds currently gather, the lack of toilets, and the failure to screen out traffic noise from the Marble Arch roundabout.

A small temporary exhibition, visible as the backdrop to the bespoke wooden soapboxes from which Royal Parks CEO Linda Lennon CBE and the Secretary of State addressed the assembled media (below), included material from the Sounds From The Park archive, and pictures from my Speakers Cornered project, so as well as being hugely entertained, I got to photograph my own photographs in the place they were originally taken. 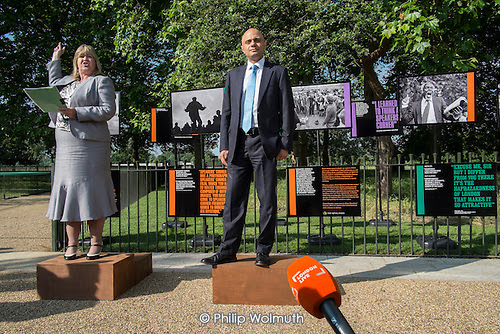 Posted by PHILIP WOLMUTH at 4:58 pm No comments: