Another Way of Telling*


The ability of my point-and-shoot camera to record video was not a feature to which I had paid much attention until about three years ago, when I was asked to do some simple 'talking head' interviews to accompany a photo story. Since then HD video has become standard on professional DSLRs, and a growing number of photographers have begun to experiment with it, producing short movie and multimedia pieces. The form is ideally suited to the web, the dominant medium of the age, and it seems that more and more publications and organisations are commissioning this sort of work instead of stills.

The evidence is only anecdotal, but given the popularity and flexibility of online video, coupled with the negative impact on many photographers and writers of the ongoing shift from print to cyberspace, a move towards multimedia and video-based journalism makes a lot of sense. What are the implications?

Multi-skilling is not new to photographers who, over recent years, have had to adapt from film to digital and keep up with continual hardware and software upgrades, but shooting video is a substantial leap into a medium with some very different dimensions. For many, dealing with audio is a whole new ball game, as is getting to grips with video-editing software.

With regards to equipment, although the new DSLRs are capable of producing seductively high movie quality, they have some serious limitations as video cameras, particularly in relation to ergonomics and focussing. On many models monitoring and controlling sound quality requires clumsy workarounds. These factors make them very good for some purposes, and very bad for others, with implications for both the style and content of what can be done with them.

For freelancers whose incomes have already been hit by falling reproduction fees and fewer commissions, finance may be a problem. Even assuming ownership of an appropriate, video-enabled camera, there are significant additional costs: tripod heads, microphones, stands, editing software, hard drives and other bits and pieces. In my case, a more powerful graphics card was needed to run Final Cut Pro on my Mac.

For some people there may be another issue. In old-fashioned trade union jargon it was known as 'demarcation'. Are photographers taking the work of videographers and film-makers? We complain when regional newspaper employers send their writers out with cameras. Is this any different? As a photographer who writes, I've never known how to answer that question – other than to say that, with some notable exceptions, writers with cameras tend to produce pretty poor pictures.

In fact, the context of what we might call the 'new video' is very different. This is not newspaper owners trying to cut costs at the expense of jobs, but photojournalists – particularly freelancers - adapting to the enormous changes brought about by the growing dominance of the web. The content that has migrated from print to webpage has not done so unchanged, but is increasingly exploiting the richer possibilities of the digital medium, and is prompting a realignment of skills from all concerned in the process. There is a niche here for low-budget video and multimedia produced with a photojournalistic sensibility. Not cut-price BBC or Wardour Street, but something specifically suited to the new website-oriented universe.

Why am I writing this now? Because I've moved on from my point-and-shoot and recently completed a commission shot on a DSLR. The form offers another way of adding words to pictures, and I find it very attractive. Suddenly the subject has a voice. Although the maker still controls the final output, the balance of power is shifted. The video (above), about the reorganisation of Camden Council's housing repair programme, is really a piece of reportage, shot in much the same way I would have gone about a photo story. The subject may sound like the topic of a tedious Powerpoint presentation, but it really isn't: the voices of public service workers talking about what they do each day and the quality of the service they provide, are totally engaging. At just under nine minutes, it's probably a bit longer than a typical made-for-web piece – the target is often between two and five minutes - but it was shot to a brief, and around nine minutes was what was required.

For me, this is doing what I have always done - visual storytelling - using the most appropriate technology available. I'm still a photojournalist working on my own. I am not attempting the complexities open to a four-person film crew, but can offer instead a photojournalist's eye and understanding, and a cost more appropriate to the limited purpose at hand – in this case a showing at a conference and extended use on the council's intranet.

I don't think I'm taking anyone's bread from their mouths, or at least no more than any freelancer competing for work. The fact that I sometimes shoot stills and sometimes shoot video doesn't really make any difference. The internet is steadily reshaping the way journalism works, offering both threats and opportunities to those whose living depends on it. In the move away from print, much advertising revenue has gone AWOL. Although there is big money to be made on the web, not enough of it is filtering down to creators (particularly photographers) to compensate for that loss - the extraordinary proliferation of still imagery online has also contributed to devaluing its currency. It's an adapt-or-die situation. But it's not just necessity driving change: the new microphone in my bag has added another dimension to what I can do, and I really like it.

* apologies to John Berger
Posted by PHILIP WOLMUTH at 10:05 am No comments: 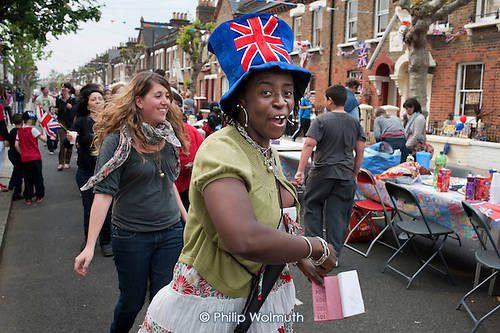 Last week the residents of Queen's Park ward in Westminster won a two year campaign to establish a Community Council, the first such local elected authority in London since parish councils were abolished in the capital in 1963. In a referendum made possible following a change in the law introduced in 2007, 64% voted in favour of a precept which will add between £39 to £44 a year to typical council tax bills and provide the new body with a budget of £100,000.

The area has a long history of community activism. Its current most visible manifestation is Queen's Park Neighbourhood Forum, a residents' organisation set up with the help of Paddington Development Trust. The forum began the campaign for the new council after its funding was cut by the coalition government. Although situated in one of the wealthiest boroughs in the country, the ward is one of the 10% most deprived - in marked contrast to the 'other' Queen's Park, the upmarket area across the tracks in Brent.

Elections for the new council will take place in 2014. More pictures here 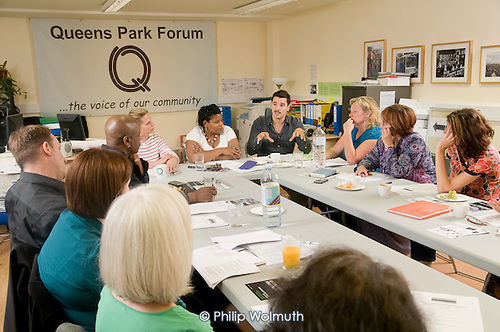 Posted by PHILIP WOLMUTH at 1:56 pm No comments: