The Dustbin of History: Kodachromes 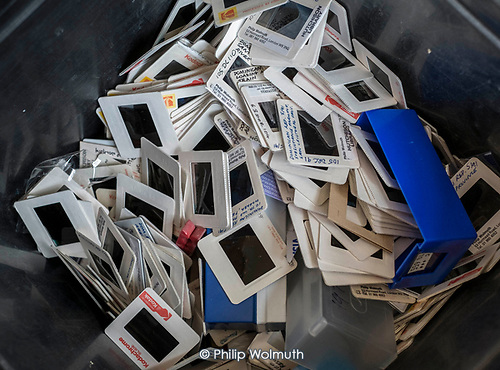 It feels like sacrilege, but I am in the process of binning large numbers of Kodachromes.


In the days of colour film, Kodachrome was the gold standard. It's what the National Geographic photographers used, despite its now unthinkably slow speed (64 ASA, unless you were a masochist and went for the 25). It had other drawbacks: it had to be sent back to Kodak for processing, so couldn't be used on jobs that required a fast turnaround, and, to get the best out of it, accurate exposure was essential. But, correctly exposed, it produced transparencies with great colour, contrast and sharpness, and reputedly better archival stability than any other film. I used it on virtually all my foreign trips through the 1980s and 1990s.


It was only when picture desks started going digital, and image distribution switched from Royal Mail or motorcycle courier to FTP and email, that another disadvantage was revealed: Kodachrome's unique emulsion structure made it quite tricky to scan. Getting the colour and contrast right was not straightforward, and Digital ICE automated dust-removal, which worked well on other colour film stocks, could not be used. That meant dust and scratches had to be removed by hand in Photoshop. Scanning Kodachromes was hard work.


However, that's not why they're in the bin. Distributing images shot on colour transparency film to multiple publications meant shooting multiple frames, or making duplicates after the event.  After each trip one set went into my own filing cabinet, and selections of 'similars' went off to the various picture libraries that also distributed my work. Over the last few years they have all come back, like long lost homing pigeons: many agencies have closed, and those that haven't no longer deal in hard copies.


Once an image has been digitised, identical copies can be made effortlessly, with no loss in quality. There's no need for 'seconds' or spares. So, although I can't bring myself to throw away the original of anything worth scanning, I've finally got round to trawling through the stacks of returned suspension files, comparing 'similars', keeping the best, and dumping the rest.  What I'm doing is completely logical - it just feels like an unforgivable sin.

Pictured above is a binful of hundreds of slides from two trips to the Dominican Republic, for Christian Aid in 1983, and Oxfam in 1991. Scans of some of those I've kept are here.

Posted by PHILIP WOLMUTH at 4:32 pm No comments:

For most of the 1980s the National Union of Public Employees (NUPE) was one of my most regular, and most enjoyable, sources of work. Its members were the unsung heroes of our public services – ambulance drivers, cleaners, carers, caretakers, cooks, dustmen, home helps, hospital porters and other NHS ancillary staff, street cleaners and more – and my commissions for the NUPE Journal gave me the opportunity to visit a huge variety of workplaces and meet the people who worked in them (more about that here).

The monthly assignments also meant I frequently photographed the union's General Secretary, Rodney Bickerstaffe, whose untimely passing was announced this week. It was always a pleasure. He was wise, witty, warm and, above all, a fantastic public speaker. He will be sorely missed.

Posted by PHILIP WOLMUTH at 5:24 pm No comments: