Uber alles: we're all in this together 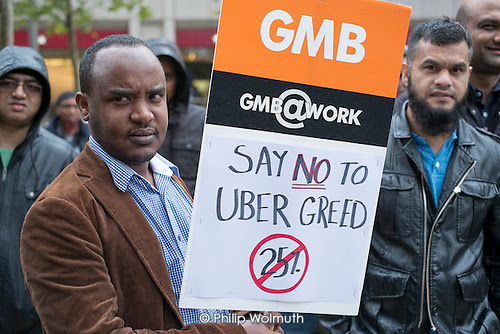 Drivers' protest, 12-11-15
When Shadow Chancellor John McDonnell speaks of an army of self-employed workers who have been casualised by the internet, he could be talking about the 100 or so Uber drivers who protested outside the company's London HQ last week (above). But he could also have been talking about some of the freelance photographers documenting their demonstration, hoping to make a sale through one of the big online news photo agencies.

The positions of the two groups are remarkably similar: both provide their own, expensive, equipment; neither have guaranteed hours of work or income; in both cases, terms, conditions and rates are set by the company; and in both cases there seems to be an endless supply of service deliverers struggling to make a living from ever-decreasing rates of pay. The drivers' protest, sparked by an imposed 5% increase in commission, was not the first time they have lost out financially through changes imposed from above.

In a way, Uber is quite honest about its role. The big photo agencies hide behind bland titles. The names of Alamy, Getty, Corbis and the rest promise nothing. Perhaps only Demotix hints at some sort of (non-existent) egalitarian enterprise.

But although Uber calls its drivers 'partners', the company's real relationship to its workforce is pretty much as described by its moniker. In German, of course.

Many of the drivers have now joined the GMB. Hopefully collective action, with its backing, will bring results. It would be good to see photographers attempt something similar.