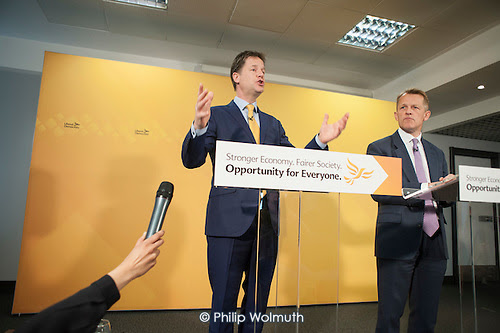 For the second time this week Nick Clegg has lost his radio mic feed in the middle of a live broadcast. On Sunday, a few minutes into a double act on the economy with David Laws (above), people suddenly started scurrying around in front of the podium with hand-held mics, and all the photographers were ushered to the back of the room to stop the barrage of shutter clicks drowning out the resulting rather low-grade audio. When this work-around proved inadequate, the Lib-Dem leader was taken into a back room to have his transmitter adjusted. Apparently he was apoplectic, but managed to re-emerge and continue with gritted teeth well-hidden.

And earlier today The World at One (BBC Radio 4) clearly found a microphone malfunction during the Lib-Dem manifesto launch more interesting than any other aspect of the event, and played its listeners a generous stretch of crackle and dropped syllables.

Is this a deliberate Lib-Dem strategy aimed at livening up what many observers regard as an (until now) extremely dull campaign - or could it be sabotage?  We must be told.  More pictures here.

Posted by PHILIP WOLMUTH at 5:28 pm No comments: