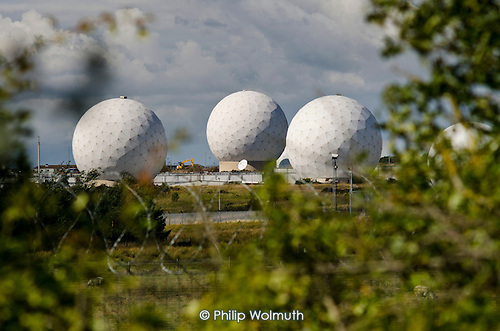 Samuel Johnson famously declared that patriotism is the last refuge of a scoundrel, but 'national security' is also a popular destination these days. Home Secretary Theresa May has been spending a lot of time there recently so, as I was passing one of its northern outposts last week, I called in to take a look.

The radomes (radar domes) of Menwith Hill RAF base in Yorkshire, the largest secret intelligence-gathering system outside the USA, are plainly visible from miles around. But at close quarters the installation, run by the US National Security Agency (NSA), is not very welcoming. Thickly planted bushes block the view through the high wire mesh fence that surrounds it, and CCTV cameras monitor every entrance. Although I was doing nothing illegal, I was surprised not to be apprehended as I poked my lens through the shrubbery, and kept an eye on my rear view mirror as I drove away.

As we have now learned via the Guardian and elsewhere, the facility is part of the global network that spies on our emails, telephone calls, web searches and browsing history, and anything else we do with radio waves or online. We are told it is there to make us safe and secure, and that if we haven't done anything wrong, we haven't got anything to worry about. But that's not how David Miranda felt after being held at Heathrow Airport for nine hours on Sunday, and this piece of the 'national security' infrastructure is also far from benign. Despite the assurances, it's not a good refuge for anyone, even scoundrels. Miranda was working for the Guardian when he was detained, and his phone, laptop and USB sticks (all seized by the police) should have been treated as 'special procedure' material, protected under laws designed to ensure press freedom. The Home Secretary needs to come out from her 'national security' hidey-hole and give some straight answers to the very straightforward questions being asked of her.
Posted by PHILIP WOLMUTH at 12:15 pm No comments: