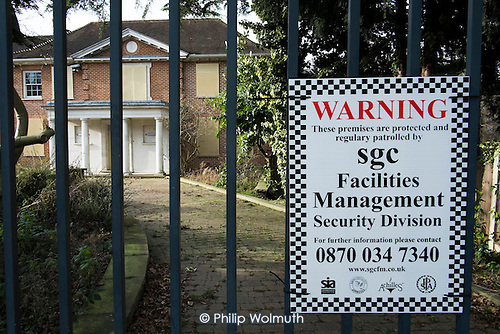 The Guardian's exposé of the extraordinary state of 'Billionaire's Row' – The Bishops Avenue in north London – is yet another reminder of just how dysfunctional the UK housing market has become. Mansions worth together around £350 million are lying empty (above), many decaying into serious dereliction, whilst the government's 'bedroom tax' is forcing large numbers of those at the other end of the 'property ladder' to quit the capital, often leaving behind family, friends, schools and job opportunities.

Boris Johnson's answer? To charge owners of empty properties worth over £2 million a 50% Council Tax surcharge. Or maybe 150%. The Mayor isn't very good on detail. That should really hit the owners hard. The rate for the top Council Tax band in Barnet is £2832.40, so the surcharge would be either £1416.20, or £4248.60, depending on what he means. One of the Bishops Avenue mansions, Dryades, until recently the property of the Pakistan Minister of Privatisation (clearly a post with a generous salary), was bought for £12 million in 2007 and, according to the Guardian, is currently believed to be worth £30 million. That's a profit of £18 million in seven years, or just over £2.5 million a year. A few thousand pounds of Council Tax isn't going to make much of a dent in that.

Interventions by this and previous governments aimed at addressing failures at the opposite end of the market have been no better. The other streets where boarded-up houses lie empty, and bulldozed vacant lots stand unattended, are the result of the Housing Market Renewal Pathfinder programme in Oldham (below), Liverpool and several other northern cities, started by Labour and prematurely shutdown by the coalition. Both bad decisions.

The abysmal record of government interventions at both ends of the property market highlights the failure of market-based solutions to a problem that requires social and economic planning, not blind faith in the beneficence of laissez-faire profiteering. More pictures here. 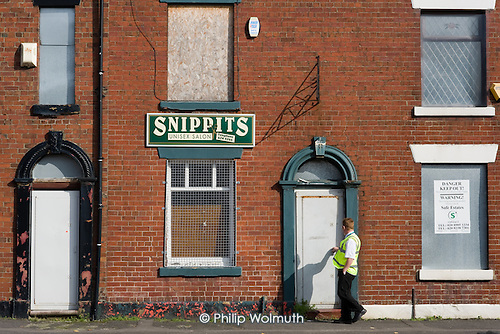 Posted by PHILIP WOLMUTH at 2:20 pm No comments: