Photography in Hungary: The Law is an Ass 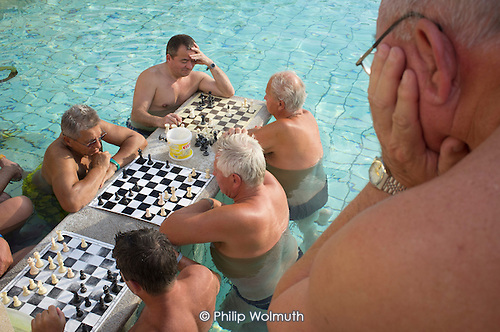 Back in March there was a flurry of comment after a new civil code came into force in Hungary which made it illegal to photograph someone without their express permission. In theory, the law makes photography in a public place virtually impossible, so before a trip to Budapest earlier this month I called the Hungarian Embassy in London to check it out.


The first person I spoke to was completely unaware of the issue, but passed me on to a more knowledgeable colleague, who laughed off my concerns and told me there would be no problem taking photos wherever I liked. I found this reassurance only mildly convincing. The law is quite clear, and a pre-existing ruling, that police can only appear in a published photograph if their faces are pixellated beyond recognition, is strictly adhered to.


Commenting on the new civil code in The Guardian, Márton Magócsi, senior photo editor at news website Origo, said at the time: "having to ask for permission beforehand is quite unrealistic in any reportage situation”. He also pointed to the danger that private security guards or the police could use the law to block access to reporters and photojournalists. Much of the work exhibited in Budapest's recently opened Robert Capa Contemporary Photography Centre would not exist if such a law had been in place and adhered to. Likewise the work of the renowned Hungarian photographer and Magnum co-founder himself.

Nevertheless, I wandered around the capital with my cameras without incident and, on a visit to the Szechenyi thermal baths (above) was astonished to see a TV crew filming freely around the pools and many of the punters strolling about taking pictures without interference. That's not something that would happen in the UK today – it's been a long time since photographers here were regarded as a benign, even welcome, presence. Despite the civil code, the UK's obsessional association of photography with terrorists and paedophiles does not seem to have taken hold in Hungary, and photographing in the streets of Budapest felt easier than in those of my own capital city.

However, as long as it remains on the statute book the law poses a very real threat to press freedom and to the rights of ordinary citizens. Even if largely ignored in practice, it should not be allowed to stand. 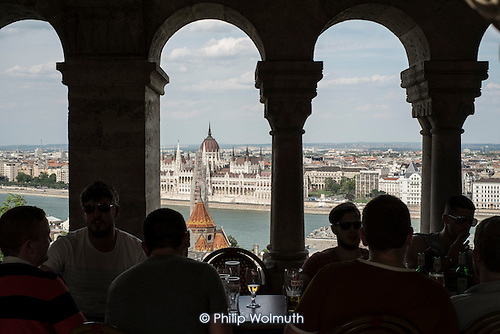 A bar overlooking the Hungarian Parliament building
Posted by PHILIP WOLMUTH at 9:44 am No comments: