Another Round of Photo Paranoia 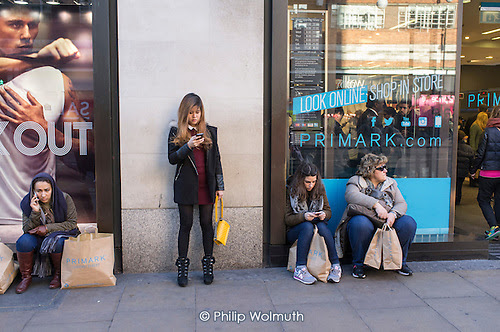 I took the photo above in Oxford Street last week. Is everyone in it over 18? I have no idea. Could I be arrested for posting it here? Not yet.

The argument over photography in public spaces is in the news again, with a proposal aimed at criminalising the publication of photographs of children without parental consent about to be debated by the House of Lords. If implemented, it would make the documenting of everyday life in public places - a central feature of photography since the medium was invented, and an integral part of our collective historical record - a potentially illegal enterprise.

Musician Paul Weller (ex-Jam, ex-Style Council) and his wife Hannah are campaigning to change the law following their successful legal action in the High Court over publication of photographs of their children in the Mail Online last year. It doesn't seem to have dawned on them that their victory in court indicates that the law as it stands is perfectly capable of dealing with the problem, as pointed out by the National Union of Journalists Photographers' Council in a response to the launch of the Wellers' Campaign for Children’s Privacy.

The central issues in this and previous similar cases are deeply political, and much bigger than the discomfort of celebrities, or the poor judgement of tabloid editors. Freedom of the press, widely recognised as a cornerstone of democracy, is the most obvious potential casualty. But what is, or is not, permitted in the public sphere is also a reflection of conflicting views on the nature of the society we wish to live in – or even if we live in one at all. To turn Margaret Thatcher's often quoted statement into a question: are there just individual men, women and families, or is there such a thing as society? If the latter, when we venture into the public realm we do so as citizens, not as private individuals, whatever our age. We must not allow yet another round of photo-paranoia to turn us into anything else.

Posted by PHILIP WOLMUTH at 5:41 pm No comments: