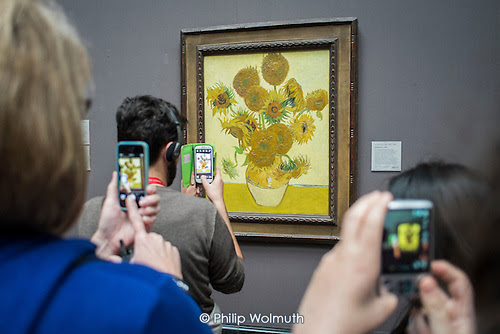 As a photojournalist and documentary photographer I am instinctively opposed to any restrictions placed on my ability to make pictures wherever I choose. So I should be delighted that the National Gallery has lifted its ban on the use of cameras and smartphones – but I'm not entirely.


Nor are the gallery attendants, who have been landed with a Sisyphean task. The change of policy, which came into force this month, was prompted by the problem of distinguishing between visitors legitimately using their phones to research paintings via the gallery's free wifi network, and deviants taking photos of its precious artworks. However, using a flash is still forbidden, and as most users of smartphones and compact cameras leave them set on automatic, flashes are firing off left, right and centre. The attendants are continually forced to intervene.

Although the gallery houses thousands of wonderful paintings by world-famous artists, one single work, Van Gogh's Sunflowers (above), attracts the overwhelming majority of snappers. It is an extraordinary spectacle. Many never actually see the painting itself, so intent are they on framing its image on their screen. Most irritating of all are those whose must-have picture is a friend or family member posing in front of the canvas. Clearly all this has more to do with Facebook than art appreciation. 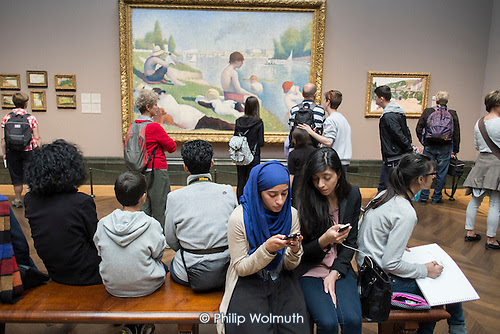 Fortunately, with Sunflowers hanging in a room conveniently close to the front entrance and taking most of the heat, the rest of the national collection remains relatively unaffected.  Leonardo da Vinci, Raphael, Canaletto – even Seurat (above) and Monet – do not attract more than the occasional smartphone or iPad.

So maybe I needn't countermand my instinctive desire for access all areas. However, I do recognise the trouble it is causing gallery staff – still, by the way, woefully underpaid and fighting a campaign for the London Living Wage (below). My solution would be to take Van Gogh's over-popular work (or a reasonable copy) and nail it to an outside wall, where the crowds could photograph it, themselves, their friends and family, without bothering anyone, including those who visit galleries to look at paintings. More pictures here. 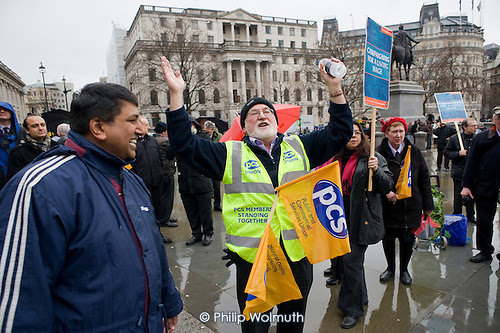 Posted by PHILIP WOLMUTH at 5:05 pm No comments: