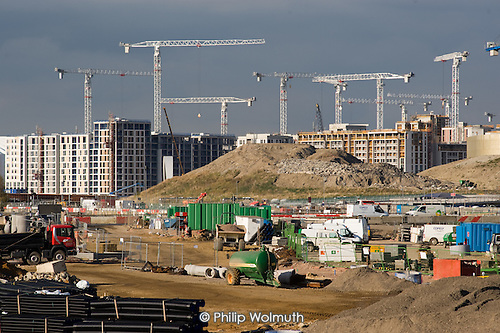 Documenting progress on the Olympic site in the Lower Lea Valley hit a major obstacle in 2007, when the Olympic Delivery Authority (ODA) put up an 11-mile long, 10-foot high blue fence. Getting inside was (and still is) almost impossible for photographers, other than those on contract to the ODA. But now work has advanced to the stage where much can be seen over the top of the long blue plywood line, especially since the completion of the View Tube vantage point on the high level Greenway footpath and cycleway.

Currently the biggest concentration of cranes surrounds a collection of concrete towers rising skywards in the north-east of the site. The Athletes Village doesn’t have any of the recognisable attributes of a village, but the viability of the social housing legacy that it represents will be an important measure of the long-term success of the London 2012 games.

More photographs of the area, including pre-fence pictures of some of the businesses displaced by the Olympic Park, can be seen here.
Posted by PHILIP WOLMUTH at 10:45 pm