Troubles with Documentary (Part One) 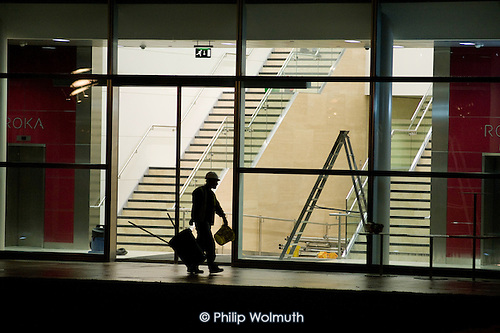 Photographers go to enormous trouble to document the exotic or dangerous in far-off places. But working closer to home, although less risky to life, limb and wallet, is becoming more and more difficult.

Street photography, which has a long and fruitful history of recording life in our shared public spaces, is under attack from misguided policemen and over-zealous security guards. The powers-that-be appear threatened by any serious attempt at documenting how the world around us looks and feels in the 21st century.

Shortly after taking the photo above in Canary Wharf, part of a project on London's Other Workers, I was politely, but firmly, asked to leave the area by two security guards. Why? Because like many parts of London and other cities in the UK, large areas of apparently public space are now private property. On another recent jaunt I was stopped by a guard, after pulling a camera from my bag on the King’s Road, because I had inadvertently crossed an invisible line dividing the public highway from an (identically paved) area in front some glitzy shops. “You can’t take pictures here, mate, it’s private property”. You can spend your money here, and even tread all over it, but photography is out of the question. Unless you’re fooling around with an iPhone or some other terrorist-friendly gadget, in which case – no problem.

It is because similar problems have been encountered by so many other photographers, both amateur and professional, that the vigorous campaigning by I'm a Photographer, Not a Terrorist has been so well supported. There are signs that the authorities are taking note, but it will be a while before change filters through to the front line on the mean streets of the capital and elsewhere.
Posted by PHILIP WOLMUTH at 6:46 pm