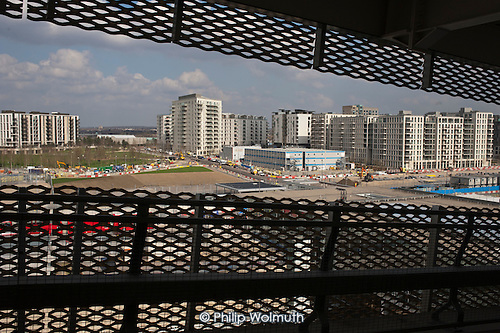 I heard the siren and reached for my wallet. I was surprised they'd taken so long: I'd been walking along the pavement by the Athletes' Village construction site (above) with a camera round my neck for almost ten minutes. By the time the four police officers emerged from their vehicle I had a smile on my face and a press card in my hand. They were very polite, looked at the card, took my name, and drove off.

There are still four months to go before the Olympics come to town, but the area that stretches from the edges of newly fashionable Hackney Wick across to the rebranded Stratford City is already sterile.

It will be a long time before autonomous human activity is possible here. For now, the general public figure only as a security issue, or customers. It's rather like a giant airport, without the planes. Everywhere there are barriers, fences, and security guards in high-vis jackets. When the circus finally comes to town it will get worse. Drones, battleships and ground-to-air missiles have been promised.

From the Greenway, the well-used public footpath that runs along its southern edge, the out-of-bounds Olympic Park is underwhelming. Through wire mesh screens, even the supposedly iconic ArcelorMittal Orbit (below), by the usually wonderful Anish Kapoor, looks a mess, the sculpture's name itself a reminder of the dead hand of corporate capital that underpins the whole enterprise.

Sprawling around the north-east of the park the concrete towers of the 'Village', now jointly owned by the Qatari royal family and private UK investment company Delancey, are nearing completion. Overlooking the site from Stratford High Street is a 43 storey tower draped in huge banners advertising construction company Ardmore and Genesis Housing Association. And the self-styled 'Gateway to the Games' is Westfield Stratford City, the largest shopping centre in Europe.

If I were an athlete, focussed single-mindedly on the culmination of four years hard work, none of this would matter. But I'm not. I don't like starring on someone else's CCTV screen. I don't like being treated like a profit centre on legs. And I hate airports. There must be a better way to run a sports tournament. 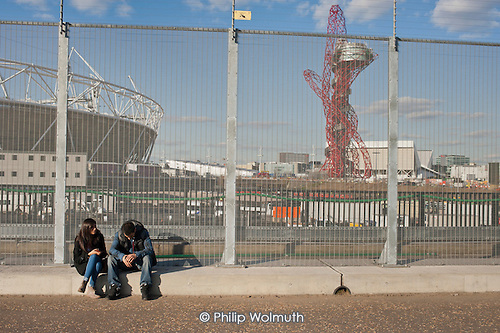 Posted by PHILIP WOLMUTH at 5:00 pm